A game of fun, excitement and a good dollop of exercise! Pickleball is one of the newest and most popular sports in the world today. Quite a few celebrities enjoy this sport – the Kardashians, Justin Trudeau, Phil Mickelson and Andre Agassi, to mention a few! It combines features of tennis, badminton and ping pong and can be played either in singles or doubles. A fixed set of rules make it easy to play. It’s ideal for people of all ages and from all walks of life. According to the USA Today, there are even quite a few prisoners who love playing the sport in jail!

To play this marvelous game a paddle is used to hit a ball, similar to a whiffle ball, to and fro from opposite sides of a court. What makes it interesting? That’s something you’ll only get to discover when you pick up that paddle and start playing Pickleball yourself! 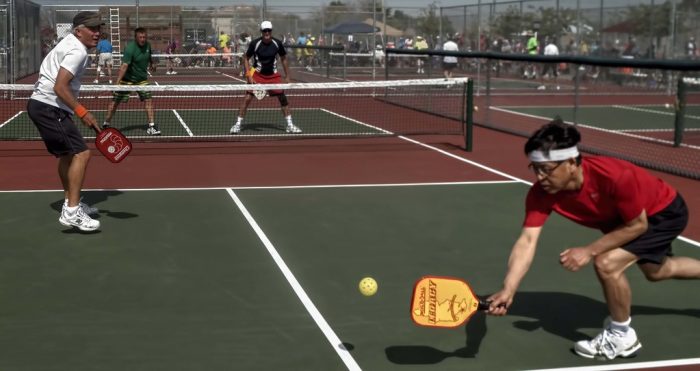 The History of Pickleball

Legend has it that Pickleball was first played in the summer of 1965. Three dads had run out of options on how to entertain their kids. These three were Joel Pritchard, Bill Bell and Barney McCallum. One day, when they returned home from golf, the families were quite bored and decided to have an afternoon of playing badminton.

Unfortunately, no one could find the shuttlecock, so they decided to use a whiffle ball instead. They lowered the badminton net and made plywood paddles from leftover wood at a shed close by. This was the first game of Pickleball ever played!

There are two theories about how the sport was named. The first has to do with the Pritchard’s dog, who was named Pickles. The second is from ‘pickle boat’. This is a term used for crew in racing. Apparently, Joel Pritchard’s wife, Joan, was a former rower and had come across the ‘pickle boat’ tendency. This is where oarsmen for the last boat, the pickle boat, were chosen from leftovers from the other boats. Since this game is a mish-mash of other games, it was given the name Pickleball!

Who Can Play Pickleball

Anyone can play this amazing sport!  It’s as popular in retirement centers as it is in elementary and high schools – and it is especially a favorite with seniors. It is not only easy to play; it’s also easy on the joints and the body. The beauty of Pickleball is that you can play it in a variety of styles, pace and strategies. You can decide how much moving around you want to do and keep it slow, if that’s how you want it!

It’s a very easy and convenient game to play, since it requires very little equipment: a Pickleball paddle, a Pickleball ball and a Pickleball net. If you have a good net, you can set it up anywhere – as long you have a flat surface measuring  44’ by 20’.

There are hundreds of Pickleball paddles available online and in stores that you can opt for. We’ve reviewed the best of the best paddles so you can avoid the homework and buy a great paddle and balls to play Pickleball!

How is Pickleball Similar to Badminton, Tennis and Ping Pong?

It shares quite a few features with badminton, tennis and ping pong. It is supposedly a hodge-podge of all these games put together to enhance the fun! A Pickleball court is the same size as a badminton court – since it was first played on a badminton court. Secondly, it is played with many of the rules that also apply to tennis. Read our article about turning a Tennis court into a Pickleball court. And then there’s the fact that it’s played like Ping-Pong, only the scale is much bigger!

What are the Rules of Pickleball

Like any other game, understanding the rules and keeping true to them makes the game a lot more fun. The rules are there to help avoid conflict, since it’s meant to be a lighthearted way to spend time and make friends on the court. All of the integral rules of Pickleball have been explained here: they’re pretty easy to understand and follow. Most of the rules have to do with the serve: the play is simple so the rules for play are very few!

Some of the Common Pickleball Terminology

Like any other game, the sport of Pickleball has its fair share of jargon! Here are a few terms explained because want to ensure that you’re not scratching your head and wondering about what you hear on the Pickleball courts!

We’ve reviewed all the terminology used in Pickleball – it’s quite a lot- and put it here so you can use it next time you’re on the courts!

Pickleball, for all its funny, quirky name, is a game that is built to get you off the couch and on to the court. Most people who start off with playing Pickleball soon find themselves looking for at least one hour a day when they can forget everything and play Pickleball! The amazing thing about Pickleball is: it’s also proven to be a great workout – so you can gladly forfeit your gym hour for this amazing sport!